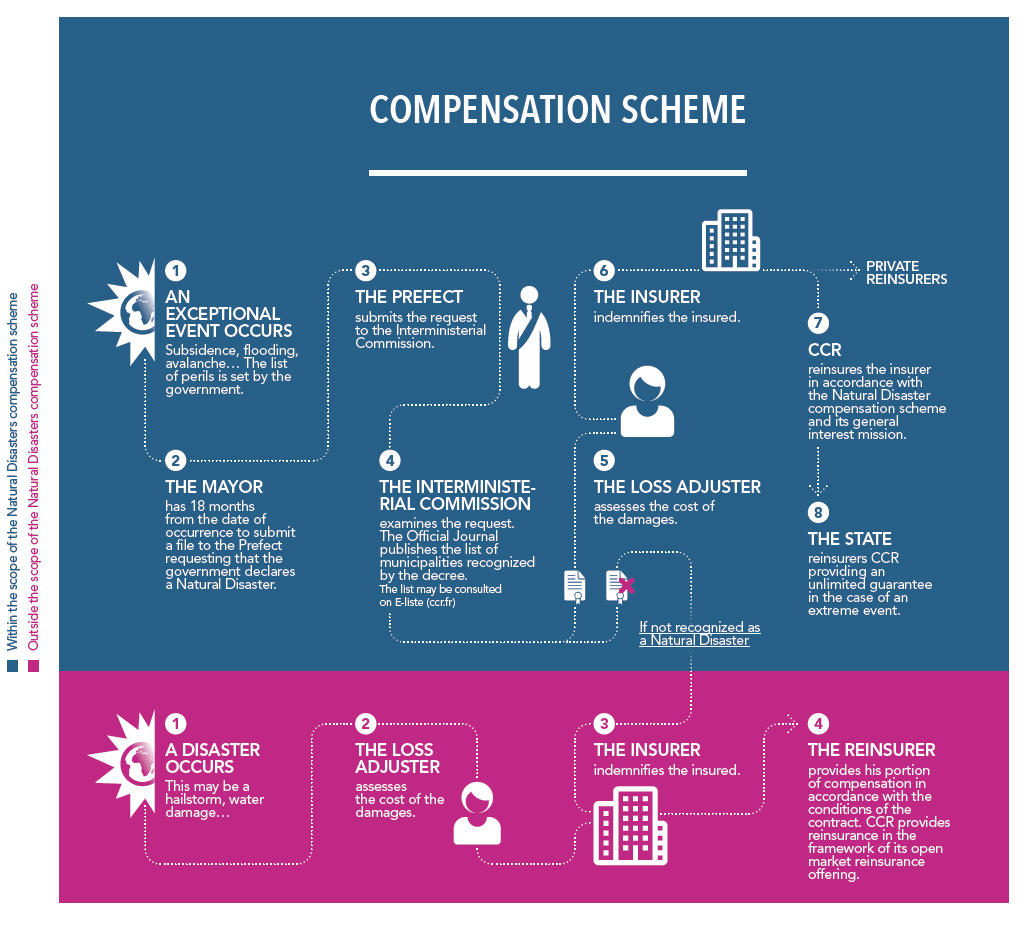 NATURAL DISASTER COVERAGE IS COMPULSORY in all property insurance policies. Almost all victims of natural disasters therefore benefit from the coverage.

France is one of the very few countries with a system that guarantees all its citizens adequate compensation, in the event of loss and/or damage caused by a natural phenomenon.
This document summarises the system's bases and principles and how it works.

The natural disaster compensation scheme was created by the Law of 13 July 1982. It was introduced to make up for the inadequate cover of natural disasters, for which, until then, only very low levels of insurance were provided.
It is based on paragraph 12 of the preamble of the Constitution of 27 October 1946, which states: "The Nation declares all French citizens to be equal and united in solidarity when faced with loss resulting from natural disasters."

The scheme's design is comparable to a building:
1. it has been skilfully designed, based on a detailed plan – legislator's specifications;
2. it rests on solid foundations – solidarity and responsibility;
3. it has been built on solid cornerstone – public-private partnership;
4. it has solid pillars – insurance and State-backed reinsurance;
5. it has a keystone that gives it stability and longevity – State guarantee.

The legislator had to design a system on the following specifications:

The legislator created a coherent compensation scheme, all parts of which are inextricably linked in effectively serving the public interest.

These two fully complementary values are the scheme's founding principles:

•Solidarity takes the form of the same additional-premium insurance rates (set by the government) applying to all those covered by the scheme.

These rates currently stand at:

•12% of the premium of the basic insurance policy covering property other than motor vehicles,
•6% of premiums for fire and theft insurance (or, failing this, 0.50% of the property insurance premium) for motorised land vehicles.

These rates thus, enshrine the solidarity principle in the natural disaster scheme, irrespective of the level of risk exposure, guaranteeing cover for everyone at affordable prices – it being specified that natural disaster cover is compulsory in all property and casualty insurance policies.

The Scheme's solidarity is also provided by state-backed reinsurance, enabling insurance portfolios to be mutualised at national level and which has the State guarantee (see below).

•Responsibility is ensured by deductibles and risk prevention plans.

The Law of 13 July 1982 established a compensation scheme including compulsory deductibles together with a prevention plan (Risk Exposure Plans, which today have become Risk Prevention Plans).

These links between compensation and prevention have been strengthened by a sliding scale that adjusts the deductibles applying to communes that do not have Risk Prevention Plans, to encourage them to introduce such plans.
Accordingly, since 1 January 2001, in communes without Risk Prevention Plans, it has been possible to adjust deductibles after two government declarations of disaster concerning the same type of peril (except for motor insurance policies).

Minimum compulsory deductibles
They are set by the State, are compulsory and cannot be “bought back”. Since 1 January 2001, they have been set as follows:

The two preconditions that must be met to trigger the compensation scheme clearly illustrate this partnership:

•Condition of a public nature: a government decree declaring a disaster must be published in the Official Journal.
•Condition of a private nature: the lost and/or damaged property must be   covered by a property and casualty insurance policy (fire, theft, flooding, etc.).

Moreover, a causality link must exist between the declared natural disaster and the loss and/or damage sustained.
More generally, the public-private partnership is established through the pillars and cornerstone that constitute the compensation scheme's inextricable components.

Strengths of insurance:
It mobilises true risk-sector professionals. The insurers and their loss adjusters are in charge of:

•distributing and establishing mutual-based statutory cover, through their insurance policies (compulsory cover);
•collecting monies (statutory additional premiums);
•quickly calculating and indemnifying those having suffered losses in accordance with the regulatory conditions.
•Thanks to such use of the insurance sector, the natural disaster compensation scheme is a local, responsive and efficient service, that is governed by law and serves the general interest.

State-backed reinsurance proposed to insurers by Caisse Centrale de Réassurance (CCR) is a second vector for ensuring the scheme's mutual basis and a guarantee of stability.
It is a general interest initiative since CCR is mainly tasked with:

•reinsuring any insurer so requesting within the legal framework, irrespective of its book of business;
•providing mutual-based reinsurance, at national level, of all risks by reinsuring the various insurers' books of business;
•creating robust and sustainable reinsurance cover, by avoiding too large a transfer of risks to the reinsurer and, indirectly, to the State.

Natural disaster risks can engender major disasters and substantial losses, the cost of which cannot be borne solely by the insurance and reinsurance markets.

In order to avoid any failure of the system, the legislator has provided for State intervention as a last resort. Accordingly, the State guarantee is extended to CCR, to enable it to fulfil its general-interest mission, as mentioned above. This guarantee is therefore the final constituent part of the building, that represents the natural disaster compensation scheme.
However, CCR does not have a monopoly on natural disaster reinsurance.

The natural disaster scheme is therefore comparable to a solid and well-designed building which is able to provide compensation commensurate with the extent of losses:

The scheme thus, compensates the population without State intervention, except in exceptional circumstances where losses exceed the scheme's funding abilities.

HOW THE SCHEME WORKS

1. Mayor's role
The mayor initiates the request that the government declare a natural disaster, by sending the prefect a form, containing the following information:

Any request made by a commune eighteen months after the beginning of the natural event is refused.

•a detailed report established by it's departments;
•the mayor's files;
•the list and location of applicant communes;
•a technical report on the phenomenon's nature and intensity, prepared by a competent department;
•any other document (photos, press cuttings, etc.) that can be used to analyse the phenomenon.

3. Interministerial Commission
The interministerial commission has no real legal existence. It prepares the ministers' decisions concerning the declaration of natural disaster.
It meets once a month or so (except in exceptional circumstances).

It comprises the following ministrys' representatives:

CCR fulfils the role of secretariat.

The Commission's assessment criteria are as follows:

The main reasons why the Commission refuses requests are as follows:

•the event's exceptional intensity is unproven (most frequent);
•the peril is outside the scope of the Law of 1982;
•there is a prevention failure (a very rare case);
•the prefectoral file is incomplete (deferment).

A deferred or refused request may be re-examined, if the prefecture submits additional information. 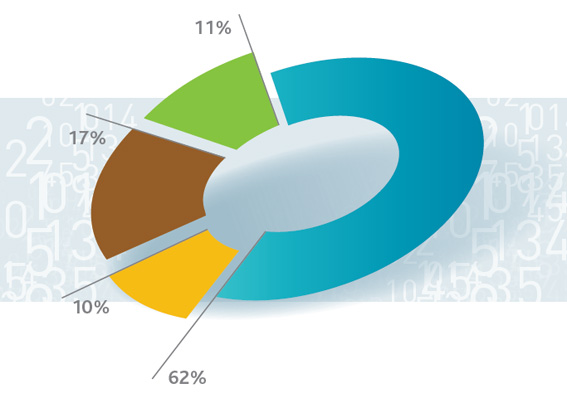 Main characteristics of the "natural disasters" legal guarantee
The guarantee's introduction was facilitated by property and casualty insurance's very high penetration rate in France.
It is not a true insurance scheme but a compensation scheme based on a public-private partnership that uses the insurance industry's networks and mechanisms together with substantial government support.

System's scope
The Law of 13 July 1982 provides a list neither of covered perils nor of excluded perils. Article 1 of this law only describes what is considered as being the effects of a natural disaster.

Definition: "uninsurable direct material loss and/or damage the determining cause of which was the exceptional intensity of a natural element."

1. Perils normally covered
Perils coming within the scope of application of the Law of 1982:

2. Perils excluded in principle
Because they can be insured, the following perils are considered to be outside the scope of "natural disaster" cover:

They are covered by insurance, which justifies their exclusion from the statutory natural disaster scheme.

Reasons for its intervention

•It is in exchange for the insurers' obligation to provide cover.
•The State guarantee enables CCR to offer insurers –who are obliged to provide their policyholders with natural-disaster cover, without being able to limit their liability–, reinsurance comprising unlimited cover.
•By being authorised to reinsure natural disasters with the State guarantee, CCR enables the State to ensure, that the scheme for compensating victims of natural disasters, remains solvent.

•Offer robust and sustainable reinsurance cover.
•Ensure that the State guarantee applies only in the event of exceptional losses.
•Thus, ensure the longevity of the natural disaster compensation scheme.

06/18/2020 2019 was a year marked by another series of natural disasters both in France and abroad, which demonstrated reinsurers’ social utility. The reinsurance sector also saw consolidation and transformation, in atypical conditions on the financial markets.

06/25/2019 This report indicates the procedures applied to take into account the criteria for compliance with environmental, social and governance objectives in our investment policy, and the means employed to contribute to the energy and ecological transition.

07/03/2018 This report indicates the procedures applied to take into account the criteria for compliance with environmental, social and governance objectives in our investment policy, and the means employed to contribute to the energy and ecological transition.